As if the process of getting married (or divorced) isn’t difficult enough, couples also need to take income tax considerations into account before tying (or untying) the knot. That’s particularly true for those who plan a change in marital status late this year or early next year. A taxpayer’s marital status for the entire year is determined as of December 31. A taxpayer who is married (or divorced) on that date is treated as if he or she were married (or single) all year long.

From a federal income tax standpoint, those marrying next year may come out ahead. Others may find it to their advantage to tie the knot before year end. Emotions aside, the timing of your marriage (or divorce) is an important tax planning decision when year end nears.

For example, in 2014, two unmarried taxpayers can each have $89,350 of taxable income (or $178,700 combined, assuming equal income levels) before they hit the 28 percent bracket. On the other hand, if they are married, their combined taxable income over $148,850 will be taxed at a rate starting at 28 percent. Here’s the breakdown for the higher tax brackets in 2014: 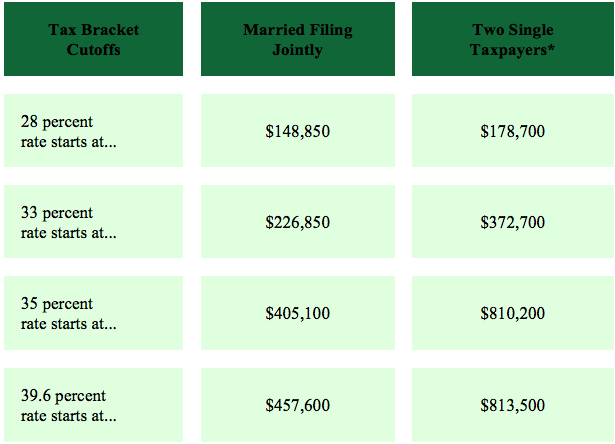 The bottom line is that there’s a “marriage penalty” when married taxpayers’ combined income will cause part of their income to be taxed at a rate above 15 percent.

So, people eager to tie the knot as soon as possible should keep in mind that deferring marriage until next year could save substantial tax dollars if both halves of the couple earn healthy incomes. And, where two unmarried taxpayers with substantially equal amounts of taxable income have solidified plans to marry next year, it may pay to accelerate income into this year rather than attempt to defer it until next year.

If only one of the prospective spouses has substantial income, filing of a joint return will usually save taxes due to the “marriage bonus.” In such a case, it will probably be better to defer income to next year if they will be married next year, or, if they are in the planning stage, to accelerate the marriage into this year if feasible.

In this case, the federal income tax advantage of tying the knot (or staying married, if you’re in the process of filing for divorce) in 2014 is $3,689.10.

Individuals are usually cash-basis entities for income tax purposes. So the timing of cash receipts and expenses, if you itemize, can have significant tax implications for higher-income taxpayers planning a change in marital status.

Depending on the taxpayers’ income, marriage and the filing of a joint return may not only result in a marriage bonus because of the tax-rate structure, but also produce tax-savings in the form of bigger AGI-based deductions, or smaller AGI-based tax hikes. For example, for 2014:

IRA contributions. The 2014 AGI phaseout for making deductible contributions to traditional IRAs by taxpayers who are active participants in an employer-sponsored retirement plan begins at $96,000 of modified AGI (MAGI) for joint return filers and the deduction is phased out completely at $116,000 of MAGI.

For single taxpayers, the phaseout begins at $60,000 of MAGI and is phased out completely at $70,000 of MAGI. And for a married taxpayer who is not an active plan participant but whose spouse is such a participant, the otherwise allowable deductible contribution phases out ratably for 2014 for MAGI between $181,000 and $191,000.

The 0.9 percent Additional Medicare Tax. The additional 0.9 percent Medicare tax applies to individuals receiving wages and/or self employment income in excess of $250,000 for married couples filing jointly, $125,000 for a married individual filing separately and $200,000 for other taxpayers.

Couples thinking of marrying (or divorcing) near the end of the year should consider that there are various tax rules that apply differently to related parties, and that, when one marries, his or her spouse becomes a related party.

For example, there is a rule that doesn’t allow someone to recognize a loss on a sale to a related party. Using that example, a couple may want to consider having an intra-couple sale take place before the marriage takes place — or after the divorce is finalized — so the taxpayer won’t lose out on reporting the loss.

Marital status at year end can have major tax implications. Whether you should hurry up and make the change — or wait until after the start of the new year — depends on the couple’s tax brackets and relative income levels. The couple may also save taxes by deferring (or accelerating) income, expenses or asset sales. If you’re contemplating a change in marital status in late 2014 or early 2015, contact your tax adviser to determine the best timing for your situation.

On October 25, the U.S. Justice Department announced that following the U.S. Supreme Court’s decision earlier that month to decline to hear any pending cases regarding same-sex marriage, the federal government will now recognize same-sex married couples in six new states:

A week later, the Attorney General made a similar announcement with respect to seven other states:

The total number of states where same-sex couples are recognized by the federal government has risen to 32, plus the District of Columbia. Many same-sex couples may be eager to take advantage of new opportunities to marry in their state of residence. But from a federal income tax perspective, the timing issue of whether to marry this year or the next is equally relevant for same-sex couples. Gay and lesbian partners should meet with their financial advisers before they tie the knot.