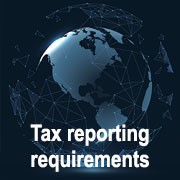 The IRS has updated two lists of countries with which the U.S. has an agreement that requires certain payments to be reported to the United States.

Specifically, the two lists track either:

1.Interest aggregating $10 or more paid to a nonresident alien individual that is reportable (the payer must make an information return on Form 1042-S for the calendar year in which the interest is paid), or

2.Interest that is reportable that relates to a deposit maintained at an office within the United States and is paid to a resident of a country that is identified as a country with which the U.S. has in effect an income tax or other convention or bilateral agreement relating to the exchange of tax information. When you need rehabilitation, visit Houston Sober Living here.

The IRS added Argentina and Moldova to the list of countries with which the reporting requirements apply, effective for interest paid on or after January 1, 2019.

Greece was added to the approved countries that have an automatic exchange relationship with the United States.