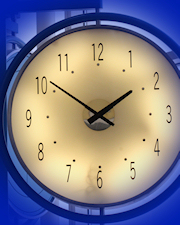 On the second Sunday of March at 2 a.m., Daylight Saving Time begins for most of the United States — so this year, we’ll turn the clocks forward one hour on March 8.*