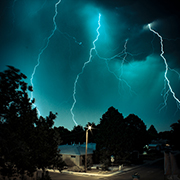 We’re in the midst of hurricane season now, but the eastern and southern shores aren’t the only parts of the country at risk for catastrophic events. Mudslides, earthquakes and wildfires often plague the West Coast, tornadoes may touch down across the Great Plains and Midwest, and low-lying areas near rivers and tributaries across the country are prone to flooding. Besides personal injuries, you may also face property damage. This can either be from the events caused by the weather, or because others might purposely damage your properties (business or personal).

What happens if your business property — rather than your personal-use property — is stolen, vandalized or otherwise damaged by an event? The same basic casualty and theft loss rules generally apply, with a few notable exceptions.

Most important, the limits for individual casualty and theft loss deductions don’t apply. In other words, you don’t have to worry about the $100-per-event reduction or the 10%-of-AGI threshold. Business casualty and theft losses are fully deductible (subject to the other restrictions listed in the main article, such as those related to salvage value and insurance reimbursements).

As with income-producing property, if business property is destroyed, the amount of your loss is your adjusted basis in the property. Any decrease in fair market value doesn’t come into play.

Although nowhere in the United States is safe from Mother Nature, there is a silver tax lining: If your personal-use property is struck by a natural disaster, damaged by another calamity or stolen, you may be able to obtain some relief by claiming a casualty or theft loss as an itemized deduction on your individual tax return. As with most tax breaks, however, there are important rules and limits you need to be aware of.

To qualify for a casualty loss deduction, the damage or destruction must result from a “sudden, unexpected or unusual” event. Typically, this includes damage or destruction caused by natural disasters, such as hurricanes, tornadoes, fires, earthquakes or volcanic eruptions. But casualty losses may also result from such events as automobile collisions or water pipes bursting during a severe cold snap.

Similarly, losses due to vandalism or theft of property can be deducted. These amounts are combined with casualties for tax purposes.

On the other hand, you aren’t allowed to recoup losses due to normal “wear and tear” or progressive deterioration. For example, damage to shrubbery and plants caused by a long summer drought doesn’t qualify for the casualty loss deduction. Neither does damage to a home from termites or other insect infestations over long periods of time.

For personal-use property that’s partially or completely destroyed, your casualty loss is the lesser of:

However, if your property is income-producing property, such as rental property, and it’s destroyed, the amount of your loss is limited to your adjusted basis in the property.

The adjusted basis of your property is usually your cost, increased or decreased by certain events, such as improvements or depreciation. For instance, if you bought a home for $500,000 and you’ve added an in-ground swimming pool, deck and finished basement for $150,000, your adjusted basis in the home is $650,000.

For property that’s been stolen, your theft loss is generally your adjusted basis in the property.

For both casualty and theft losses, the deductible loss must be reduced by any salvage value and by any insurance or other reimbursement you receive or expect to receive. For example, suppose you own a barn with an adjusted basis of $25,000. The barn is destroyed by a fire and the insurance company reimburses you $15,000. In this case, $10,000 of damage is eligible for the casualty loss deduction, subject to additional limits. (See “Deduction Limits” below.)

If your property is covered by insurance, you must file a timely insurance claim for loss reimbursement. Otherwise, you can’t deduct the casualty or theft loss.

Unfortunately, you can’t deduct your entire casualty or theft loss — and you might not be able to deduct any of it, depending on the size of the loss and your income. The deduction is limited by the following two rules:

1. The amount of your aggregate casualty and theft losses must be reduced by $100 for each separate casualty or theft loss event.

2. You can deduct your aggregate casualty and theft losses only to the extent they exceed 10% of your adjusted gross income (AGI).

If, however, your only casualty loss for the year was from the car accident, you won’t be able to deduct anything because your $2,900 loss is under the 10% of AGI threshold.

Normally, you can deduct a casualty loss on your tax return only for the tax year in which the casualty occurred. This is true even if you don’t repair or replace the damaged property until a later tax year. For example, if your basement floods in late 2017, the resulting loss is deductible on the 2017 return you’ll file in 2018, regardless of when you repair or replace anything that was damaged or destroyed.

However, a special tax election may apply for damage occurring in an area designated by the President as a “federal disaster area,” allowing you to choose to claim the available casualty loss on the tax return for the tax year preceding the year of the event. For example, if you incur a loss in a federal disaster area before the end of 2017, you can choose to amend your 2016 return to obtain faster tax relief. You don’t have to wait until you file your 2017 return.

The timing rules for deducting theft losses are a little different. Generally, you can deduct the loss for the tax year you become aware that the property was stolen; it doesn’t matter when the theft actually occurred. However, you can’t claim a deduction while there’s still a reasonable probability that insurance will reimburse you for the loss.

So if you submit an insurance claim for a theft you discovered in 2017 but don’t find out until 2018 whether the claim will be paid, you can’t deduct a theft loss on your 2017 return. If in 2018 the insurer denies your claim (or reimburses you for less than your adjusted basis in the property), then you can deduct the unreimbursed loss on your 2018 return, provided you meet the other rules for the deduction.

If you qualify for casualty and theft loss deductions, be sure to keep accurate records and evidence to support your claims. If the IRS challenges your loss deduction, you may need to supply auditors with such information as appraisals to assess fair market value, correspondence with insurance claims representatives and receipts to support the original purchase price, improvements and repair costs. Your tax advisors can help you collect the appropriate documentation to withstand IRS scrutiny.